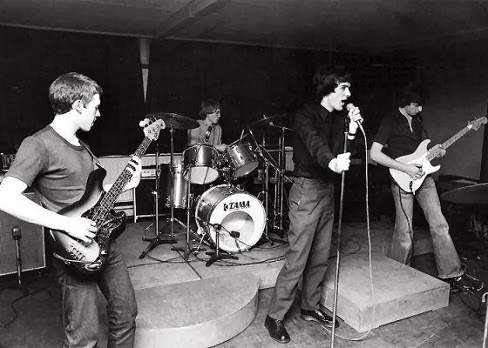 The genesis of Crispy Ambulance, one of the more obscure Factory Records-related bands of the Manchester post-punk scene of the late-1970s and early-1980s, can be traced back to The Sex Pistols' first Manchester gig in June, 1976, which Crispy Ambulance vocalist Alan Hempsall later described as having taken place "in front of an audience of about 40, made up mainly of Bowie clones and hippies." While The Sex Pistols left a lasting impression on Hempsall and guitarist Robert Davenport, it was only after seeing Howard Devoto's first gig fronting his new post-Buzzcocks band, Magazine, that these lifelong friends felt compelled to start their own band; thus Crispy Ambulance was born. The name itself has garnered a fair share of ridicule over the years, even being cited on occasion as the chief reason they were fated to languish in relative obscurity, rather than becoming heirs to Joy Division's lofty post-punk mantle following the suicide of Ian Curtis. As Hempsall explains, "People asked about the name and how it originated every time we did an interview. The answer is, I'm afraid, quite a boring one. It is simply that a close friend [...] thought it up. He has a way with words, and I thought it was such a nondescript name (silly too) that we decided on it. Also, at the time every other band was called 'the...' (fill in blank space) whereas our name gave nothing away with regard to image, musical style etc., but at the time captured the imagination."

After adding bassist Keith Darbyshire and drummer Gary Madeley in 1978, Crispy Ambulance began playing regular gigs throughout the Manchester area, eventually catching the attention of the band they would later be unjustly accused of imitating. Hempsall: "Joy Division stumbled upon us in July 1978 at a gig we played in Manchester, and they liked our approach, even if the material was a little weak- to say the least. They dragged Rob Gretton, their new manager, down to see us some months later, and as a result we did a gig with them at The Factory around the time that Unknown Pleasures was released." Despite such connections, the band's first single, "From the Cradle to the Grave / Four Minutes from the Frontline," was turned down by several local independent labels, so Crispy Ambulance decided to release the single on their own makeshift imprint: Aural Assault. Hempsall: "The idea for Aural Assault came from the fact that we'd already tried Rough Trade and Factory and they'd turned us down, but Rough Trade gave us loads of info and addresses for a do-it-yourself single, which Rob Gretton encouraged us to do. So I came up with the bank loan and the name." Crispy Ambulance would eventually be signed by Factory, but only after the tragic death of Ian Curtis in May, 1980, which lead to the demise of Joy Division and their manager, Rob Gretton, joining Factory Records as shareholder and an A&R man. His first priority was signing Crispy Ambulance despite the protests of the label's co-founder, Tony Wilson, who never liked the band.

However, "The Crispies" much anticipated move to the Factory roster was both a blessing and a curse. On the back of a few initial singles that had garnered the band a number of critical reviews accusing them of being little more than Joy Division wannabes, Hempsall, Davenport & co. went into the studio with producer Martin Hannett, already a Factory legend due to his significant role in shaping the sound of Joy Division's studio recordings. The result of this collaboration was the confusingly titled single, Live on a Hot August Night, which did not win Crispy Ambulance any additional supporters at their label. Hempsall: "Hot August Night was the first time we actually went into the studio as a Factory band. As a matter of course Hannett was used as he was The Factory producer [....] Tony craftily got us off his back by depositing us on Factory Benelux, which we didn't object to because Tony was only making things difficult for us whilst on Factory, whereas Michel Duval, boss of Factory's Belgian counterpart, genuinely liked us, and had an enthusiasm for the records almost as strong as our own." 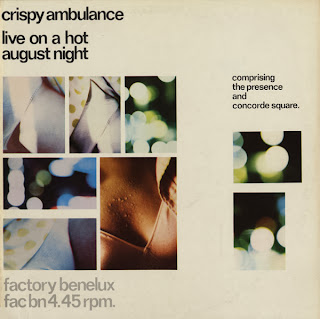 Live on a Hot August Night (a decidedly un-Joy Division-like title) was roundly dismissed at the time as little more than a product of Hannett once again taking on the role of production- booth auteur, this time attempting to turn a group of nondescript Manchester post-punkers into the second coming of Joy Division. For example, Melody Maker had this to say about the single's a-side, "The Presence": The best and worst of Martin Hannett and, as usual, you can forget the band. 'The Presence' illustrates his genius for that eerie, evocative snare-obsessed sound, cleverly maintaining interest in another Curtis clone crooning another doomy dodo of a tune." And NME chimed in with, "After the power and the passion that was Joy Division, imitators like Crispy Ambulance just sound listless and unoriginal." While it is obvious Hannett saw the Crispies as mining similar sonic territory to Joy Division, the single itself suggests a sonically restless band largely uninterested in remaining in any particular place very long, a trait that would fully take hold the following year on their brilliantly innovative full-length, The Plateau Phase. Listening to "The Presence" thirty years after the fact, it's hard not to describe the song as a long lost post-punk gem, undoubtedly reminiscent of Ian Curtis & co., but moving in a number of additional sonic directions at once, such as the ironically boyish charm of Hempsall's vocals repeating the mantra-like lyric, "there's no sense in trying / it changes nothing," and the languid, uniquely proggy atmosphere that sets it apart from their more famous label-mates. It stands as one of the Crispies', and Hannett's, finest moments. 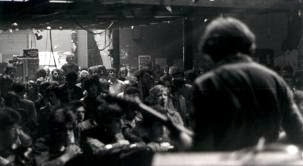 Despite the under-appreciated brilliance of "The Presence," little could have prepared Crispy Ambulance's fans and critics alike for their first and only Factory album, The Plateau Phase, now considered one of the finest and most timeless works in the label's catalog. Still banished to the Belgian subsidiary, Factory Benelux, the album was produced by Chris Nagle, as Hannett had parted ways with The Factory over a financial dispute in early 1982. This was a fateful pairing, as Nagle, who had engineered most of Joy Division's studio recordings, was able to aid the Crispies in developing a recorded sound that hinted at influences ranging from kraut-rock legends such as Faust and Can to bands such as Pink Floyd (at their most experimental) and Van der Graaf Generator. Named after a stage in the female orgasm, The Plateau Phase begins with the aptly-titled "Are You Ready?," a powerful opener that manages to weave together meditative Tibetan bell effects, electronically manipulated percussion, a charging prog-rock arrangement, and a lead guitar part carrying the melody that wouldn't be out of place on a Bauhaus record. Another stunning track is the instrumental, "Simon's Ghost," which comes off as something like a proggy version of New Order's "Elegia." A simply gorgeous finale to one of the most singular and unsung masterworks of the early- 1980s.

Nevertheless, many seemed unwilling to give The Plateau Phase even a cursory listen; for example Mat Snow, writing for NME at the time: "[...] whereas Joy Division were sincere and inspired in their depiction of obsession, loss and desolation, Crispy Ambulance are portentous, inane and very, very boring." In a 1983 interview, Alan Hempsall discussed the band's unfair treatment at the hands of many critics: "It was a combination of three factors that made us the media's favourite whipping boys: joining Factory, our early JD influence, and Ian's death. It would be stupid of me to deny that Joy Division had a considerable influence on our music around the time of our first single, and I see no shame in that. Prior to Ian's death people who were fans of JD appreciated what we were trying to do. We never set out to deliberately sound derivative. Then afterwards the same people became wrapped up in the romance of the whole unfortunate episode, and presto!- all of a sudden we were treading on sacred ground." While The Plateau Phase would serve as the band's epitaph until reforming nearly 20 years later, they did leave behind a few scattered studio tracks and some revelatory radio sessions that are well worth hearing, all of which can be found on the Frozen Blood 1980-1982 compilation. While Joy Division is justly considered the holy grail of early post-punk, Crispy Ambulance represents an all-too-often ignored chapter in the story of Factory Records and the rise of the Manchester post-punk scene whose reverberations are still felt to this day. 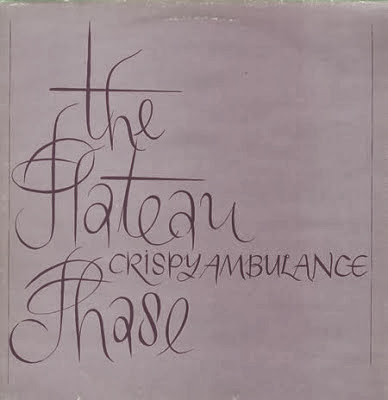 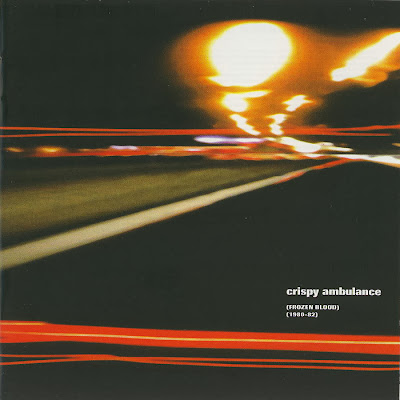 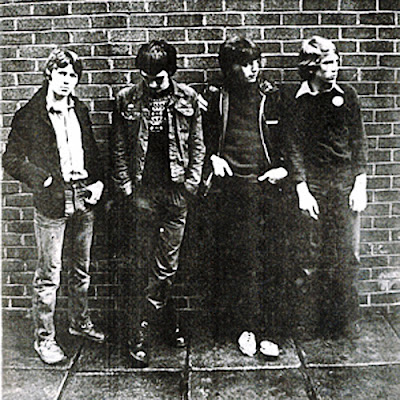 Only the Lonely Fine Print

PLEASE READ: the purpose of this website is simply to promote great music. As such, there is no copyrighted material contained herein, only links to external servers. Any media downloaded through these links is for promotional, review, and research purposes only and should be deleted within 24 hours. What this means is if you try something and you like it, then PURCHASE IT from the artist or an independent retailer. First and foremost, we must support these artists! If an artist or artist's representative desires a link or links to be deactivated, then send an email to the address listed in the "Contact the Lonely" tab. I will be happy to comply if your claim is legitimate. Also, PLEASE DO NOT re-post Only the Lonely links, but feel free to link back to the blog! Thank you.

Search the Archives of Loneliness

The Master of Loneliness